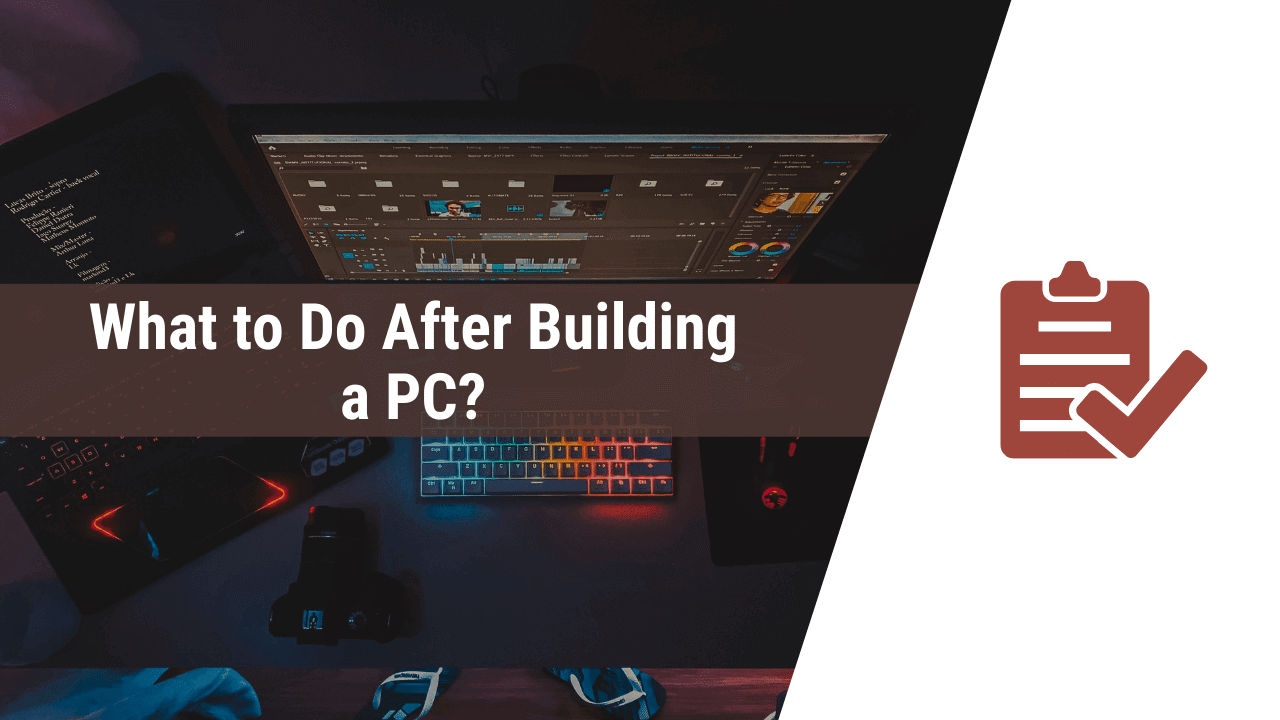 You build your PC, set it in its place but now the question is, what’s next? Building a PC was one of the most challenging jobs which you completed, but the journey isn’t over yet, there are various other things that you need to do after building a PC in order to make your build up and running.

After building a PC, there are various things that need to be set up, such as BIOS settings, setting boot devices in your BIOS, installing an operating system, installing drivers & antivirus security, checking all the component’s performance, and many more other things which we are going to discuss in this article.

So let’s get started with our post and know what to do after building a PC.

What to Do After Building a PC

After building a PC, you need to boot it up for the very first time to check if it even works or not. If it powers up, you’re in the right direction other you need to check what went wrong while building a pc & assembling components.

If it boots properly, then it’s time to get started with our journey.

The first thing you need is to enter into your motherboard BIOS so that you can select the primary boot drive in order to install your OS in the next step and also to check some of the default settings in your BIOS.

Entering BIOS is easy, just start your PC and look on the display for BIOS. It will show you an option to press a key to enter BIOS. The key varies according to the motherboard, but usually, it’s among one of these keys ESCAPE, DELETE, F1, F2, F8, or F10.

If you weren’t able to enter BIOS is your first try, restart your PC and try again. You need to press the key when it shows the option on the screen. If you never opened BIOS on any computer before, it will take you 2-3 retries to be successful.

Once you enter the BIOS, you will either get an old-school look where there is no cursor, and you can only use your keyboard to control it, or you will get a nice graphical BIOS that can be controlled easily with the mouse. It depends on the motherboard, but nowadays, you will get graphical BIOS if you have purchased a modern high-end motherboard.

The functionality in your BIOS may vary from one motherboard manufacturer company to another, so it’s suggested to look into the manual to know more about it. One of the most important things is to get familiar with your BIOS/UEFI if you’re unfamiliar with it.

A BIOS is a firmware (can also be referred to as a piece of software) that comes pre-install with a motherboard in ROM and it’s the first program that executes when a computer is started. Whereas UEFI can be understood as the advanced version of BIOS which performs all the work of BIOS but also provides after boot time.

If you’re also planning on installing it with the help of a pendrive, you first need to make a bootable pendrive, plug it into your USB slot, and then select it as a 1st BOOT drive in BIOS. If it isn’t visible in the BIOS, you need to restart your PC after plugging in your pendrive and again enter in your BIOS to select the BOOT drive.

💡 What is BOOT Order?

A boot drive order is an order in which the PC encounters the drives when it boots (powers on). So, for example, if we select a pendrive as a first boot device and SSD as a second, the BIOS will check your pendrive first for any instance of operating system files. If it doesn’t find anything on the pendrive first, then only it will check your SSD.

This is why optical drive and pendrive are kept as 1st and 2nd in the boot order, so whenever you need to install an OS, you can easily be able to do it.

Checking the RAM speed is also an essential task in the BIOS. It helps us to know that whether we are getting the performance for what we paid. You need to look around in the BIOS for RAM speed. If you bought a RAM with XMP, enable it in BIOS and then look for the speed you are getting.

For e.g., if you have the RAM with 3200 MHz of frequency, we will check if it shows us the same speed. If you don’t have an XMP RAM, it’s normal if it shows a slightly lower frequency than usual. We will discuss this section more in the stress test part.

XMP (Extreme Memory Profile) allows users to overclock RAM by enabling it in BIOS easily. This is an important factor when buying a gaming PC so that you can always use your RAM at the highest frequency it supports.

Once you have it, insert it into your PC and set BOOT drive in your BIOS if not already done. Your windows installation will start automatically. Follow the on-screen guide to install your windows. If you never installed an OS before, then follow this in-depth guide on installing windows from Microsoft.

After installing windows, don’t forget to check for updates and install if there’s one. It helps us to find & install all the latest drivers and software that aren’t available in the Windows ISO you just installed.

Back in the day, we needed to install a driver for each and every component driver that we wanted to use in our system, but nowadays, windows updates have gotten better, and we get everything with updates.

Still, it’s better to check twice just to make sure that everything is lined up correctly. So in order to check it go to your Device Manager (where all the connected components are visible) and look for any warning icons. If you see any warning, look for its driver on Google, download it, and install it.

Various components such as graphics cards also come with a CD/DVD, consisting of their drivers. You can also use it to install drivers manually.

Stress Test helps you to know if everything works perfectly on your PC or not. You need to check if your temperature is stable enough and the system performance is stable while working on a heavy load. It’s important that you know all these things to tweak your fan speeds and check for any components that may be a bottleneck for your system.

Other than these, we also test things like whether the CPU cooler is working properly or not and whether we yield the full potential of our RAM, graphics memory & CPU, and various other things. There are different software’s out there to help you stress test automatically, such as HWInfo64, Asus Realbench, CPU-Z, etc.

Also, we need to check whether our Hard Drives are working well or not. For this, we can use a software called CrystalDiskMark.

Stress Test is a lengthy process, so instead of describing it here, I will make a detailed guide on computer stress test & benchmarking soon and link it here. 😊

If you are reading this post before purchasing pc components, I would suggest using any custom pc building tool to avoid buying a bottleneck component for your system. There are various trusted and best custom pc builders available which you can use to prevent it.

After building a PC, the last things left to do are installing an antivirus and the rest of the software & games you are planning to use on your new build.

Antivirus is always recommended to be safe from various threats, malware, and various other online scams. So always use an antivirus as additional security for your computer.

We finally completed our checklist on what to do after building a PC. Now it’s time to start using your new build and to test its limit. Start playing the games for which you created your PC build.

I hope you know now what to do after building a PC and also you might have done it. If still, you haven’t completed all these tasks, then why waiting? Complete it now and start using your PC.

If you still have any doubts or want to know more about any of the points I mentioned in this article, comment below. Also, if you think there’s some other information that I can add on the query of what to do after building a PC, reach out, and we will add it into the guide to help other seekers.

After completing all these tasks, it’s time to use your new PC build and explore it. See you in the upcoming article until then…

MyTechTalky is designed to introduce you with the best blogging tips and tricks currently available in the market and help you rank and optimize your blog.
All the information which is published on our website is collected through independent testing and research and the data is being verified through consultation with reliable sources.
We constantly update the content on our website, keeping it fresh and relevant to our readers at all times.